Have you ever felt this way? That somehow our written or spoken word just does not reflect the truth–what we are trying to get out, express or even grasp. Perhaps we are motivated to try to explain, perhaps we even draw a picture, or accompany our thoughts with body movement or emotions like tears, gestures of enormity, or a raised voice. Too often such passion or frustration at not being successful in our transmission leads to a feeling of not being seen or heard, if not to a fight.

Last night I dreamed I was in some situation where I was trying to report to someone and yet, there seemed no one in such a position. The person I thought it was, turned out to not be the one, the source of it all–whatever the “it” was–was unclear at best.

I woke with the images of a star system, followed by ones of mycelium. Recently I had been asked to use a tree to draw the image of the practice of council–as I did so, making a trunk and branches, I could not help but simultaneously envision the roots. There were so many and they simply could not fit on one page, or even in one dimension. I found myself adding little lines going in all directions almost like the tentacles of a sea creature.

It all proved to be a good exercise at best, even if not a good reflection of what’s in my heart-mind. A tree, though whole in its nature, just as we or anything we create, does not exist in isolation. Sourcing, as well as accountability, becomes a bit of a challenge if we hopefully are moving beyond patriarchal or linear systems, much less, colonial worldviews.

Once again, I come to recognize and experience the limitations of my language at least, even drawing or dancing the thought, the idea, the lineages of anyone or anything. I wake this morning returning to the value of story–for anyone to receive such, find their relationship to, and live into or not—whether it be a sharing in council. the dolphin legend, different prophecies, or origin stories.

And yet I am not released from the question of accountability–who are we accountable to in a moment, in our practices we offer others, in our communities, in our life, our time, this world. Being a writer of grants early on in life, I learned the value of such. Not simply the money that they could result, but the power of the story they offered to others. When writing a grant, yes, I was seeking funds to do what I, we, thought was of great value. In doing so, we were seeking partners, others who felt similarly. We were pressed to educate others as well, why what we were proposing was essential. We were looking for confirmation, that this idea, project or effort, was truly worth it. Funding women in their crafts, their work for their communities in different cultures worldwide; how could we not? And yet $$ or the means, the resources were traditionally not shared with them. The circumstance necessitated a sharing of why, it required a dream to be shared, often a myth, or a time before to be remembered, as well as a projection and picture of the future, a look more deeply at what could be. And then there was the story to be told once the gift was given. All stories of what happened to have a power that can be felt for centuries if not forever.

On one level in this simple example, we who wrote the grant are accountable to the funders, to the partners we found-. And, equally, I feel we are accountable to the women, to the communities we are influencing, affecting, impacting. We are accountable to all that preceded the idea, including our education, our parents, our ancestors. You laugh perhaps but think again–that bio-region, that generation, those families, human and beyond will be changed forever by the simple honey extractors and other appropriate technologies that we were able to provide.

Sometimes I have thought that many today become so-called addicted to the Internet because humans want to be connected to a bigger story, larger consciousness lens on any question or issue –more perspective, more truth, more love. It can serve as a kind of response to the limitation of any one individual speaking as named at the start. The Internet somehow feels a quite accessible way. My task or passion is to remember lying on the ground can be as well -feeling the mycelium underneath or staring at the stars up above. Seeing system after system–some lighting up stronger than others–yet none in a world of being ‘better than.’ Evolution, mutation, interdependence…words trying to get at something so “unget-at-able.” Sometimes I feel, in part, the coronavirus is here yet again to wake us up. Delta is still here as Omicron arrives.

The practice of council that Jack Zimmerman and I grew over the years, while it grew us… was recognized by many. We found partners, we remembered and we co-created forms and exercises that we felt were essential to our time, our families, communities, and world. We educated, shared, trained others, and we offered the practice as a gift–a story. As a story, it could be told over and over again and it would affect, impact, inform, influence, and hopefully with our intention be part of the healing, connect any participants with the bigger universe of consciousness, story, truth, and love.

Along the way, we would meet other councils, circle ways, and respect, and see the gift in them. Together we were in the remembering that the path of the heart is in all of our bones. And as the identity of this practice becomes known, other mutations will occur, more lights will go on in the universe, more nodes in the mycelium network. Each with their own integrity, each with an infusion of truth and love at least as much as is possible now. In this way, we are all to be accountable, accountable to the “all”.
May we each do our part–aware of our limitations, arriving with humility and faith in the biggest story of all – opening to its information, infusion, guidance, mirror, memory. It does not take fossil fuels or a lot of energy of any kind really to lie down on the earth, dream with the stars, surrender in the ocean and listen again, in respect and gratitude, for the council of all beings. So regarding council practice, rites of passage, any pearl, gift, offering, teaching or way–for me, I say be aware of sound bites or even one-person sourcing, even a culture or humans – we are accountable, responsible to those who came before, those here now and those who will come. 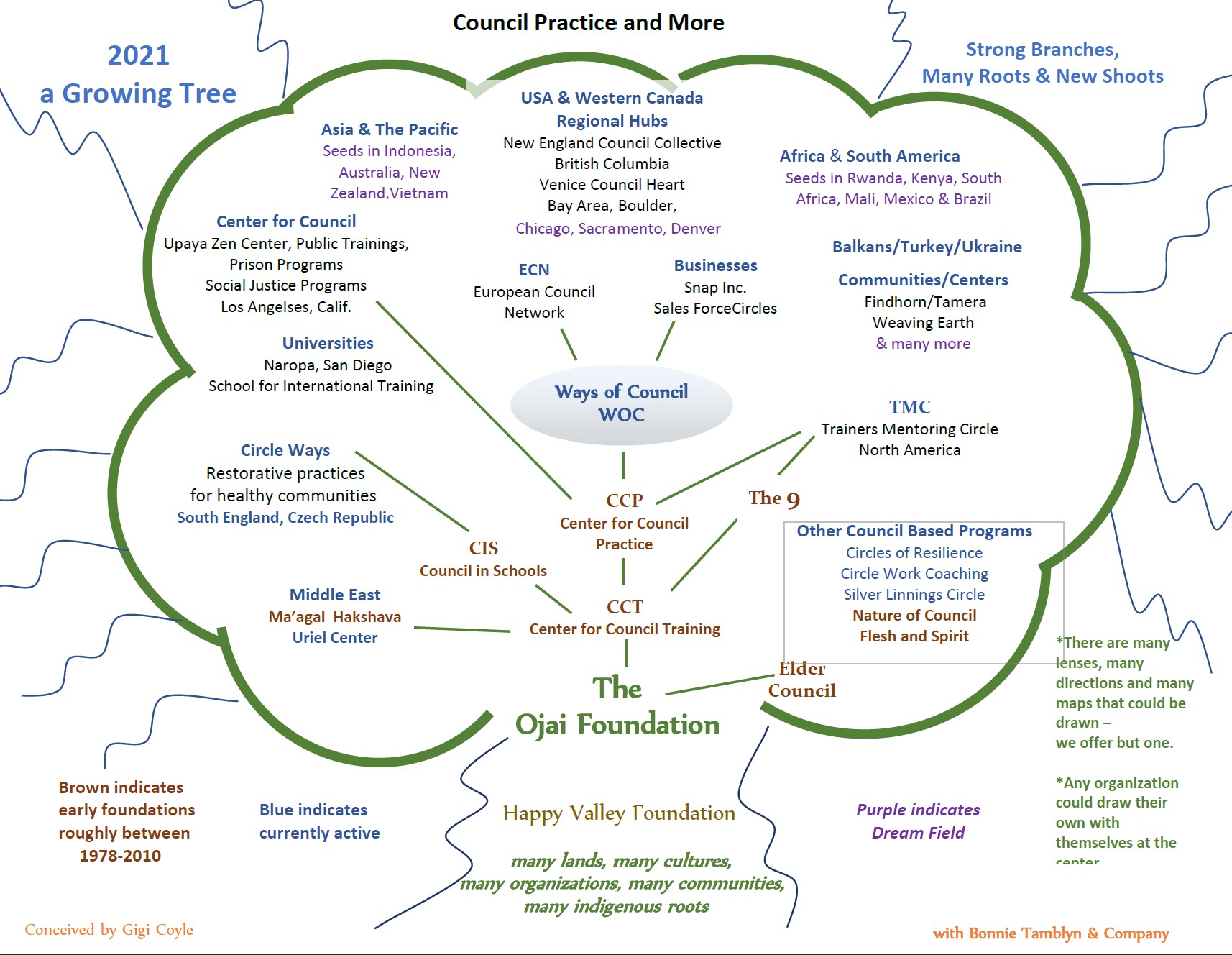 About the Author: Cameron Phelps